“Leaders in the Commercial Market”: Trademasters Featured in IE3

Trademasters appeared as a feature spotlight article in the May 2018 edition of IE3, the magazine self-described as “the source of business intelligence for the indoor environment industry.” After being awarded ACCA Contractor of the Year, Trademasters granted an interview with IE3 about its humble beginnings in the 1990s as a 2-person operation, transformation during the Great Recession (unlike many other companies, Trademasters grew rather than shrank), and rapid growth to its present size of more than 130 people. 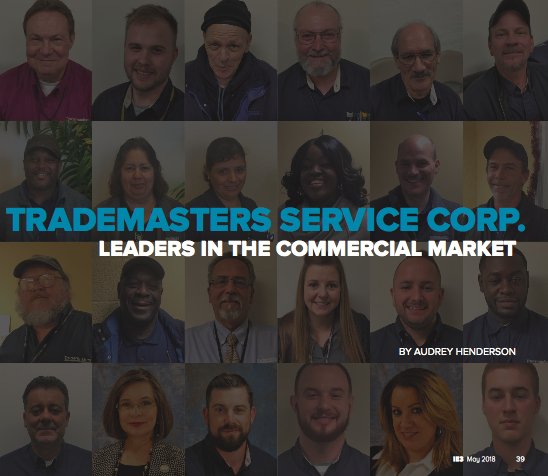 IE3 paid special attention to Dave Kyle’s vision for the company workforce as a group of coworkers rather than employees: “We get to benefit from our co-workers’ success, not just business success. I’m so fortunate to have such a wonderful team.” They also talked about Trademasters’ unusual strategy of focusing on government contracts, which operate on a different cycle than typical commercial contracts and allow more opportunities for year-round work. It was a strategy that paid off: going after government contracts as a self-performing contractor accelerated Trademasters’ growth.

The 6-page magazine article highlighted many of the features that make Trademasters unique, including Trademasters’ emphasis on up-to-date certification and large budget for co-worker training. Where most companies spend money on marketing, Trademasters allocates those funds to training instead. Investing in people is core to the company philosophy, an aspect that is clearly reflected in IE3‘s write-up — as well as the quality of work that Trademasters completes.

Trademasters is a heating, air conditioning, and plumbing contractor based in Lorton, VA that has been proudly serving the Washington, DC area since 1990. At Trademasters, we will always uphold a high standard of honesty and quality work.